Prague Declaration on European Conscience and CommunismAdvocating for equal value of lives, or equal quantities of evil?

Before continuing our examination of Hale's preface, what does the Prague Declaration actually call for? Is it truly that "red = brown"? The praguedeclaration.org web page which Hale cites is no longer available. We have reproduced the declaration below, followed by our analysis of the declaration as compared to Hale's allegations.

June 3rd, 2008, Prague, Senate of the Parliament of the Czech Republic

Bearing in mind the dignified and democratic future of our European home,

believing that millions of victims of Communism and their families are entitled to enjoy justice, sympathy, understanding and recognition for their sufferings in the same way as the victims of Nazism have been morally and politically recognized,

we, participants of the Prague Conference "European Conscience and Communism",

We, participants of the Prague Conference "European Conscience and Communism", address all peoples of Europe, all European political institutions including national governments, parliaments, European Parliament, European Commission, Council of Europe and other relevant international bodies, and call on them to embrace the ideas and appeals stipulated in this Prague Declaration and to implement them in practical steps and policies. 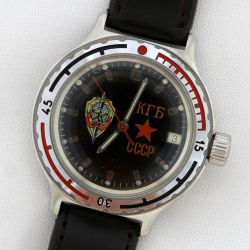 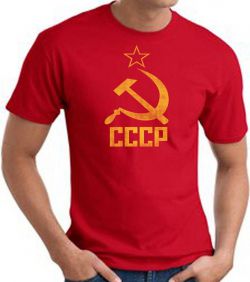 Commemorative Soviet T-shirts for sale on Amazon, "proudly made in the USA!" 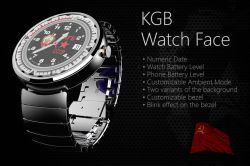 Nostalgic for the GULAG? Download the KGB watch face app for your Apple Watch

A thorough reading of the declaration reveals neither "equating" nor any evidence that the "authors of the Prague Declaration grossly distort the historical record and seek ultimately to tear down the unique moral status of the Holocaust." There is no creation of "double genocide." Indeed, the resolution takes particular care to advocate that Hitler's and Stalin's crimes be judged independently: "both the Nazi and Communist totalitarian regimes each to be judged by their own terrible merits."

Hale, who thanks Zuroff for his contributions[1], echoes Zuroff's position on the "canard of equivalency." However, Hale misquotes and misrepresents the Prague Declaration to make his case.

It is offensive to suggest Eastern Europeans seek to dilute the horror of Hitler's industrialized genocide. But if not "diluting" equivalence, as is alleged, then what does the Prague Declaration actually seek?

One only has to examine popular culture in the post-Soviet era to see, clearly, the issue at hand. Hitler and Nazi Germany are an anathema, yet admiration and nostalgia for Soviet glory continues to thrive. Nazi memorabilia is spurned, its sale often prohibited, yet Soviet era mementos are more popular than ever, untainted by the deaths of millions. One need only check eBay for "nazi medal" and "soviet medal" listings—none for the former, hundreds upon hundreds for the latter.

Hitler's industrialization of human slaughter was unprecedented. Yet, when it comes to an innocent life brutally cut short, would anyone actually argue that riding to one's death in Stalin's cattle car is less tragic, less worthy of our commemoration than were it in Hitler's cattle car?

What the Baltic and Eastern European peoples plead for is recognizing and acknowledging the equal and universal worth of life of both Hitler's and Stalin's victims.

We have mentioned World Without Nazism is a Russian front hijacking the cause of anti-Nazism to serve the Kremlin's agenda. And so, we wondered, what does the Kremlin say about the Prague Declaration?

The process that had developed after the Prague Declaration in 2008 declares the equal responsibility of the communist and the Nazi regime for crimes committed in the twentieth century (especially the outbreak of World War II), calls for recognition of August 23 as a European Day of Remembrance for the victims of totalitarian regimes.

1The equation [sic.] of the two totalitarian regimes - communist and Nazi is nothing more than an attempt of some countries of Eastern Europe to whitewash the criminal regimes who collaborated with Hitler, to shift responsibility for the genocide only to Germans, to present those by whose hands were committed the mass murder of thousand and millions innocent people as "fighters against the communist regime".

It is not difficult to see among those who called for "condemnation of communism" - right-wing political forces, social movements, pseudo-scientific research centers and museums, self-proclaimed spiritual and political successors of collaborators, 2Legionnaires' Waffen SS, Forest Brothers, Bandera, and other supporters of the Nazis.

It is no coincidence that the tendency to equate Soviet and the Nazi regime against a background of 3rapid nazification and radicalization of social consciousness in the former communist bloc. ...© 2011 Russian Embassy[2]

Contention versus Fact
1 “The equation [sic.] of the two totalitarian regimes - communist and Nazi is nothing more than an attempt of some countries of Eastern Europe to whitewash the criminal regimes who collaborated with Hitler”

As we have written, the issue is the equating of lives. Stalin's victims are no less worthy of our commemoration than Hitler's. No one seek to diminish the unique status of the Holocaust. But it is only political compromise that left mass extermination of political and social classes out of the official U.N. definition of "genocide" thus saving Stalin from guilt. That omission rendered Stalin's deportations and slaughter of Eastern Europeans including Jewry "not a genocide" based on a technicality.

2 “Legionnaires' Waffen SS, Forest Brothers, Bandera, and other supporters of the Nazis”

The Waffen SS fought only against the reinvading Soviets. The Forest Brothers were partisans who fought against Soviet power in the Baltics for decades after WWII was over. And Stepan Bandera was jailed by the Nazis for his Ukrainian nationalism. None of those the Kremlin names supported Nazism.

We arrive at the heart of the Kremlin position. Anti-Sovietism in the former "communist bloc" and occupied Baltic states is an attack on the "history" of the Soviet "liberation" of eastern Europe from fascism. Anti-Soviet = anti-(anti-fascist heroes) = pro-fascist = Nazi. The more vociferous the denunciation of Soviet subjugation, the more vituperative the Kremlin's accusations of Nazism.

While science eventually proved the chicken came before the egg, in the case of alleged "equation [sic.]," who uttered the accusation first, whether activists, the Kremlin, or Hale himself, is not material. What matters is that every repetition of the lie that the Waffen-SS Latvian Legion supported Nazism is a new lie.