Some High Latvian Politicians Think the Waffen-SS Fought for Freedom

For example, on 16 March 2014 in the commemorative events in the cemetery of Waffen-SS legionnaires in Lestene were graced by the 1very public presence and support of Dace Melbarde, who is today Minister of Culture of Latvia, and MEP Karlis Šadurskis, now the Minister of Education. In their speeches, they called the Waffen-SS legionnaires “fighters for freedom of Latvia” (see report in the newspaper Latvijas Avize, 17 March 2014, p. 2).

One year later, on March 16, 2015, the same commemorative events for the Waffen-SS legionnaires attracted the 2enthusiastic participation of Justice Minister Dzintars Rasnacs, Culture Minister Dace Melbarde, plus seven members of parliament from the National Association party and one member of the Unity party. Both parties are 3members of the ruling coalition. In addition, one of the events held in Lestene was attended by representatives of the Latvian armed forces and the Number Two in the state ladder of authority, Speaker of the Saeima (Latvian Parliament) Inara Murniece.

But do Latvia's leaders really want the country to be known in the European Union for educating its young to adulate members of the Waffen-SS?

In her speech, Speaker Murniece recalled that in 1950 the United States recognized the Latvian and Estonian SS legions as 4“different” from the German SS divisions whose fighters were actual members of the Nazi Party. She stressed that the Latvian and Estonian SS legions 5did not in her view [our emphasis—Editor] commit war crimes or crimes against humanity. A report on the commemorative events in Lestene was published on the front page Latvijas Avize of 17 March 2015. The article featured a photograph of children at the memorial stele that features the names of perished Latvian Waffen-SS. The caption to the photo reads: “Many pupils also participated in the commemorative events in Lestene.”

For future historians 6it will be a curiosity that leading Latvian politicians, praising the Waffen-SS legionnaires fighting in the army of Nazi Germany, do not meet with the tiniest official response from the Israeli Embassy or indeed the official Latvian Jewish community leadership.

I asked the head of a Jewish research organization that works closely with the Ministry of Culture of Latvia whether he would consider, bearing in mind the suffering and the number of victims of genocide by the Nazi regime in Latvia, to 7protest against the minister‘s description of the Waffen-SS as “fighters for the freedom of Latvia.”

He replied that he would not make any statement but that the speeches of his country‘s Minister of Culture are not of interest to him.

Aleksandrs Feigmanis, who holds masters and doctoral degrees, is a Riga-based historical and family tour guide and genealogist in Latvia, Lithuania, Belarus, and Ukraine. Dr. Feigmanis‘s websites are www.balticgen.com and www.balticgentour.com. His earlier contributions to defendinghistory.com are available here.

Given the tone of Feigmanis' rhetoric, we were unsurprised to find him to be the primary scholarly contributor to the Monica Lowenberg "Stop the 16th March Marches in Latvia" petition. Among other grossly mistaken contentions, it purports as history that the Waffen-SS were Nazi sympathizers, and that an equal amount of Latvians "volunteered" to join the Red Army to fight against them.

Latvians were conscripted by both sides, arrested by both sides, shot by both sides. No Latvian fought "for" the powers that occupied and decimated their homeland and fellow citizenry. To suggest they did is, perhaps, the most grievous historical lie of all—to define Latvians not by their own hopes and dreams, instead to conjure up a civil war among Latvians dividing themselves into Nazi and Bolshevik camps and willingly taking up arms up against each other. Such contentions blaspheme history and every Latvian. Contrary to Lowenberg's via Feigmanis' account, Latvians sent into battle against each other laid down their weapons and refused to engage.

Having laid out a historically false exposition concerning the loyalties and goals of the Latvian Legion, Feigmanis portrays leading members of parliament and the entire governing political coalition as a den of Nazi sympathizers. Feigmanis demeans the Holocaust and the memory of its victims by employing them as political pawns.

Feigmanis "quotes" the word "different" to suggest that the Waffen-SS were not different at all from the Nazis. U.S. authorities in Germany conducted an extensive investigation before confirming the Legion were, indeed, different. Perhaps Feigmanis is unaware that the Allies (Soviets included) posted Legionnaires as guards of the most notorious prisoners at the Nuremberg trials.

Herein lies the insidious heart of Feigmanis' thesis. No one has ever been accused of a war crime in the service of the Latvian Legion, not even the members of Arājs Kommando who were joined to the Legion late in the war as conditions on the front deteriorated, and who were ultimately convicted for their participation in the Holocaust. This is all the more remarkable given the lengths to which the U.S.S.R. went to fabricate evidence against Latvian émigré leadership, creating an entire KGB division dedicated to that mission.[2]

Feigmanis reduces to personal opinion that the Waffen-SS had no Nazi sympathies and committed no crimes—thereby elevating the alternative "view," that the Waffen-SS were Nazi war criminals, to an equally valid opinion. The Kremlin's propagandists and Internet trolls regularly employ this tactic: they reduce historical facts to opinions which they then dispute with "countering," factually fraudulent, "equally valid opinions."

6 “it will be a curiosity that leading Latvian politicians, praising the Waffen-SS legionnaires fighting in the army of Nazi Germany, do not meet with the tiniest official response from the Israeli Embassy or indeed the official Latvian Jewish community leadership”

Our hope is that some day historians will find it a "curiosity" how so many scholars and political leaders judged the Latvian Legion by their uniform—not by their hopes and dreams and the Latvian flag they wore under their uniform close to their heart—and disavowed the Legionnaires' historical DNA which instilled in them the tangible hope of repeating Latvia's first miracle of independence despite overwhelming odds against them. That so many purporting to hold the memory of the Holocaust sacred stampeded to exploit it in their domestic politics wholly unrelated to Latvia to assail their opponents as bedfellows with Nazi goons. That so many purporting to disseminate knowledge of the Holocaust in the cause of fostering tolerance and understanding engaged in prejudice and historical misrepresentation to vilify the innocent.

7 “protest against the minister‘s description of the Waffen-SS as ‘fighters for the freedom of Latvia.’”

The day Latvia disavows the Latvian Legion is the day it affirms the Soviets "liberated," not subjugated, 100,000,000 Europeans after WWII. That is the day Latvia becomes a vassal of the Kremlin. Surely that is not Feigmanis' intent, but it is the consequence of fulfilling his request.

Feigmanis has produced creditable and insightful research and scholarship on Jewish religious and secular life in Latvia. We are therefore all the more disappointed that he has chosen to take up the deeply flawed activist narrative to denounce the Waffen-SS and to smear Latvia's leadership who commemorate the Legion as Nazi glorifiers.

The moral obligation of every Latvian citizen is to challenge the ahistorical narratives others seek to impose on Latvia as "truth."

STOCKHOLM, Sweden, Wednesday, May 9 (U.P.)—The German-controlled Libau radio in Latvia announced today the formation of a so-called National Latvian Government and declared that German troops in the Baltic nation would not obey the German surrender order.

The broadcast said that the troops would continue to fight in the service of the Latvian Government under the Latvian Supreme Command.

The broadcast urged the Soviet Government to cease hostilities and applied to Allied Governments for their support and mediation.

Latvia's last gasp in WWII, as reported by the United Press.

One can make the case that Latvians should, perhaps, consider commemorating the Latvian Legion without the few remaining alive wearing their Waffen-SS uniforms. It is quite another to contend that because the Latvians fought against the reinvading Red Army and used German arms to do so, that they fought for the end of Western civilization.

Caught between two occupiers, the only option against Soviet reoccupation was the Germans. It is an utter fallacy to suggest that the only "moral" option for Latvians after Soviet annexation and Nazi occupation was to welcome the return of Soviet brutality in the hopes of some day restoring independence, to trust (trust!) that the Latvian culture and people could survive in the face of mass deportations and Russification as an increasingly marginalized sub-class in their own country. For tangible proof of the peril, one need only look to the destruction Russia has wrought upon Crimea's Tatars in six years of annexation subjugation.

The Latvians did their part for independence, holding out in the Courland Pocket until the end of the war. They could not have known that Britain, their erstwhile ally in their war of independence against the Bolsheviks had, only a generation later, prostituted the principles put forth in the Atlantic Charter to paint a Potemkin facade of legitimacy on the Baltic "petitions to join" the U.S.S.R., the act by which the Baltic states were wiped off the map.

Hindsight is 20:20. The final Western betrayal was a radio transmission from the British to the Latvian Legion telling them to expect naval evacuation. We can only surmise this commitment was quashed higher up in the command chain because the evacuation never came, condemning the Latvian Legion to the GULAG or to be shot as traitors.[3]

If the Latvian Legion fought in vain, let us not denounce them as Nazi "pawns." Let us, instead, lay blame for their failure on those who betrayed Latvia.

It was inconceivable to the Latvians that the Western Allies would allow the Bolsheviks advance all the way to the Elbe River in Germany.[4] As the Latvian Legion fought and died in Courland, holding out to the end of the war against impossible odds, hoping to repeat the miracle of their War of Independence, Roosevelt laughed with Stalin at the prospect the U.S. might intervene to defend Latvia's freedom. Roosevelt and Churchill accepted as the "price" for their own freedom, the Soviet subjugation of 100,000,000 Europeans—lives and nations which were not theirs to give—offering those they sacrificed only the cynical hope they might moderate Russia to become less barbaric some day.[5]

If the Latvian Legion is to be a touchstone, it is not that its commemoration signifies a rebirth of Nazism. It is that after holding out on Latvian territory until the end of the war, their handing over by the West to Stalin foretold the Cold War. It was only ten months later that Churchill uttered, "From Stettin in the Baltic to Trieste in the Adriatic an iron curtain has descended across the Continent."

When you sacrifice others to preserve your own freedom, you empower and encourage the tyranny you feed.

Below, a comparison of Bolshevik-held to Latvian-held territory during the war of independence and WWII. 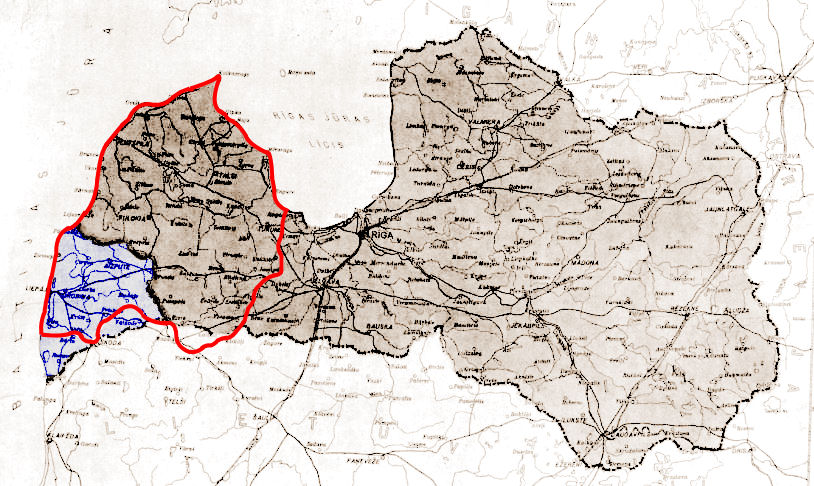 Bolshevik versus Latvian held territory (blue), maximum extent of Bolshevik control during Latvia's war of independence versus the Courland Pocket where the Latvians and Wehrmacht held out until the end of WWII (red outline)—Latvians had achieved independence starting from far less.