Going by the propaganda accounts, the transition from Soviet to Nazi occupation was marked by Latvians slaughtering their Jewish neighbours before the Nazis even arrived.

What, we wondered, was that transition between invaders like for Hāzners, who escaped from Russian arrest thanks to the German advance? We quote segments historian Andrew Ezergailis included in his review of Hāzners memoir, "Towers of Tyranny"[1] (our translation):

After night had descended, they then took me to the prison building. Entering it, I was taken aback by the unanticipated quiet, for I had imagined that the prison would be bursting at the seams. It turned out it had been completely emptied a couple of days earlier — its population deported to Siberia or taken away somewhere else right here in Latvia to be shot. And, as for me, climbing the metal steps leading to the second floor, my loose shoes sounded a dreary klip-klop, klip-klop. They stuck me in cell No. 34 right at the top of the stairs. It was three strides wide by six strides deep. The cell had a sleeping cot which could be fastened up to the wall by day, a three-legged stool, and a small table. A small window up by the ceiling was nailed over with planks. During the day the blue sky shone in at the top.

Nightmares beset me my first night, but I also slumbered in-between and saw a dream which inspired an overwhelming certainty that all would end well: I had gone to visit my grandmother, my mother's mother, and she had feasted me with a small pot of stewed pork.

In the prison's hospital wing, everyone had been shot dead; my military academy friend First Lieutenant Voldemārs Braže had even been dragged out of his cell and shot in the corridor. His corpse lay on the floor. The scene was too horrific for words. The courtyard was full of those shot dead, only some of whom had been buried. The stench of death already permeated the air.[2]

Having suffered through such horrors, little wonder the Germans were at first greeted as liberators. The crushing irony that Latvians were welcoming yet another occupation was still to be realized [our clarifications]:

We went to Brīvības iela ["Independence Street"]. All the buildings were already decked out with flags. Along Brīvības iela could even be seen four-story high flags which had been saved [from the Soviets], and I was shocked to see the German flag flying from many buildings. The whole street was full of people, everyone was carrying flowers, all were heading to the Freedom Monument. Cars carrying girls in folk costume drove slowly through the crush of the crowds. Patrols of German soldiers slowly marched in the opposite direction along the sides of the street toward Vidzeme [i.e., heading north-east out of the city in pursuit of the retreating Red Army]. The soldiers were covered in garlands, holding boxes of chocolates and other delicacies — even bottles of cognac — in their hands. All Rīga rejoiced!

Arriving at the Freedom Monument, we saw that the people ["tauta", a people as a cultural nation] had buried it in flowers. Many were crying. What gave me the deepest joy was that an honour guard of our underground fighters stood at the monument. Who had posted them? I would be the last to be ordered to remove them.

We all fell to our knees and wept, wept. Beautiful was the morning of freedom regained.[3] 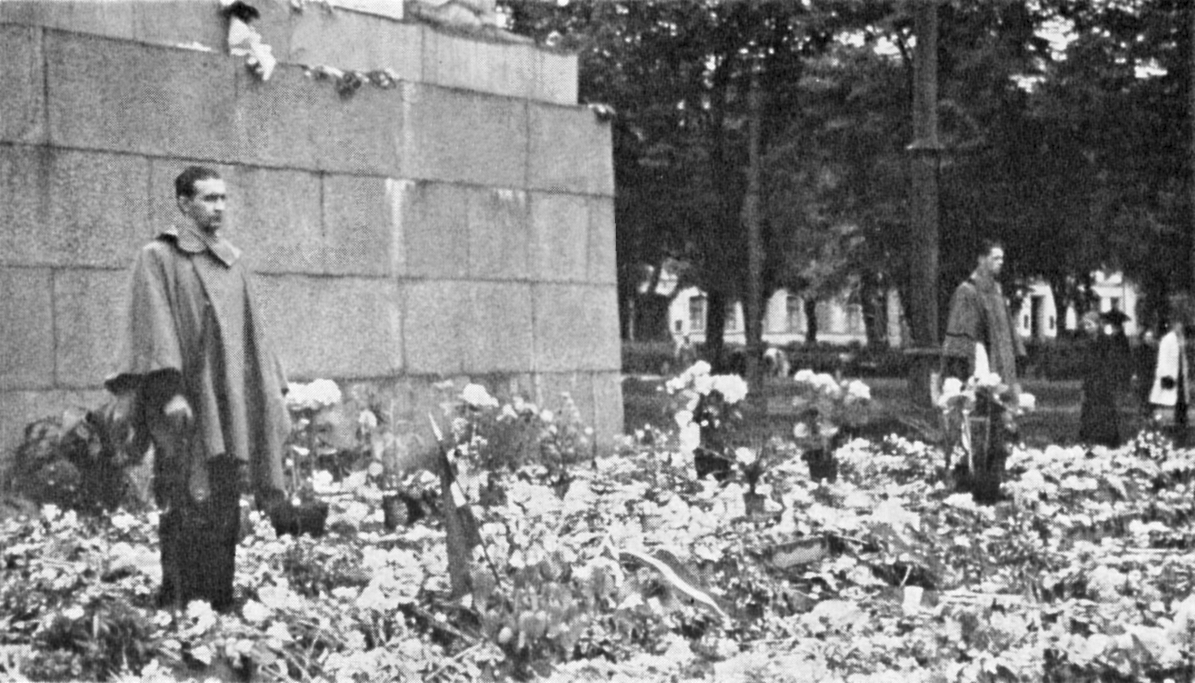 All the Latvians cared about at that moment was that the Russians were gone. People were in the streets giving thanks and celebrating, not hunting their neighbours.

For Latvia's Jews, who had already proportionally suffered more losses than any other ethnic group in Stalin's deportations only a week earlier[4]—their political and civic leadership and merchant class exiled to the Gulag—the worst was yet to come. Their irony was that the deported had a better chance of survival than those left behind.[5]