A handful of SUNYA students are pacing, talking, and waiting for the big green bus this bright but windy November morning. They scuff their shoes on the patterned cobblestones of the administrative circle. Once the bus arrives, the students will ride it north to the hamlet of Dresden, New York, in the Lake George region. There, a vigil will be held outside the home of Vilis Hazners, a 74-year-old Latvian national. He has been accused of committing war crimes against Jews, who lived in the Latvian city of Riga, while he was an S.S. officer in 1941.

The charges, according to Rabbi Paul Silton of Albany's Temple Israel, are that Hazners singled out Jews for execution at the city's ghetto gate, that he ordered Jews into the Great Synagogue on Gogol Street, before burning it down, and that he beat and tortured Jews, even forcing some of them to scrub the streets of Riga with toothbrushes. 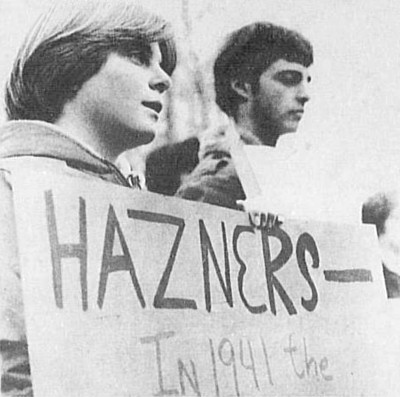 Students gathered in front of Hazner’s home.
Sign: “Hazners - In 1941 the heat was on Gogol St. Now it is on you.”
Photo: Margaret Brewster

More students gather at the circle. Scott Zemser, co-chair of the Jewish Student's Coalition (JSC)-Hillel's World Jewry Committee is speaking earnestly with two other students. Over their street clothes, they wear T-shirts emblazoned with the words "Death to Hazners". The backs of them read "Never Again". JSC-Hillel President Mark Gurvis[1] feels the shirts reflect "a lot of conflict between feelings. It's an inherently emotional issue. There is a broad range of feelings."

As Gurvis speaks, a shiny aluminum coffin is removed from a van. "It's symbolic of the deaths of 12 million people, six million of them Jewish," Gurvis explains.

"It's the tomb of the Unknown Jew," says Zemser. Students are draping the coffin in a black shroud, graced by a masking-tape Star of David.

The big green bus arrives. The coffin is loaded on, and the group, numbering fifty, follows. The doors are shut. A film crew from ABC, filming footage for a documentary on war criminals, follows in a sedan. The bus swings around the circle and heads for the Northway.

The faded clapboard house sits on a knoll. It is separated from a pitted dead-end road by a stone retaining wall, which is cut by a nubbly driveway. The front steps are a bit crooked, and the windows are near-opaqued by plastic sheets. To one side of the house is a dead tree, barely supporting a collapsing treehouse, and a wide-open garage; it contains all the usual garage junk: lawn chairs, sawhorses, scrap lumber, but no car.

If you stood inside the house and looked out through those cataracted windows, you would see the sloping lawn, the road, and the sudden drop of the hillside, you would be at eye level with the roofs of weathered barns.

Embracing candles and anti-Nazi posters, the activists are led by Albany Rabbi Paul Silton.
Silcon: “The lesson - not to repeat the silence of the Holocaust”
Photo: Margaret Brewster

Up the road now walks a quiet, determined army, led by the pallbearers and their load. The film crew follows, lugging its heavy camera and sound equipment. Someone plays Israel's national anthem, "Hatikvah", The Hope, on a recorder.

Zemser, clipboard in hand, puffs up the hill, explaining the mission. "It is to publicize the fact that there is an alleged Nazi war criminal living in that house over there who took part in crimes against Jews in Riga, Latvia in 1941, and worked for the United States government." Apparently, Hazners worked for "Radio America," an anti-communist news program, during the I950's Red scare. Zemser claims that Hazners lied on his visa application in 1956 in order to gain entry into the country, but the Immigration Service let him in, knowing about his past.

The coffin is placed before the vacant driveway, votive candles are placed on ihc shroud and lighted. The rest of the procession, almost entirely young Jewish men and women, carry placards, "Bloody Tuesday, 500 Killed", "Remember Gogol Street", "Hazners, in 1941 the heat was on Gogol Street - Now it's on you", "Hitler's Henchman Here", "Wanted - Vilis Hazners", "Never Again", are among the gripping slogans. David Holland, a student at Bet Hagga Academy, points to a placard carried by a young woman. "Take a look at that poster over there. It's a photo blowup of concentration camp victims, the bodies are emaciated, stacked like cord-wood. The caption read, "The Final Solution". "Shocking, isn't it? And right before us, one of the people responsible, living there," he says, pointing to the house.

The little army gathers in a semicircle around the coffin. To the solemn faces, Zemser speaks of the six million dead: of the Nazi occupation of Riga, where 12,000 of the millions died, of the desire for justice, and of the hope that no such slaughter will ever happen again. Prayers are said for the dead and the living, as cameras whir and click. "Merciful Father, give us heart as we recall with tearful tenderness the men and women who are no longer with us in the land of the living. Grant peace of mind to those in our midst who bear deep wounds in their hearts today, May consolation come to them soon...God remember them favorably among the righteous of the world. May he avenge the blood of his servants which has been shed. From the brook by the wayside He will drink, and He will lift up his head In triumph...Amen."

"The hope that is expressed, and the optimism in the prayers, the songs, and the readings, is built on...Israel as a national home, and as a source of national pride, and on a will for survival; unless we look out for ourselves, and unless we display that strength, we'll be gone," explains Gurvis.

As the group joins in prayer and song, several move apart and begin scrubbing the broken pavement with toothbrushes.

As "Dona, Dona," the song of the calf being led to slaughter, is sung, a State Police car rolls up quietly. A few of the group haw drifted onto the driveway. Rabbi Silton gets into the car. Heads hob and hands move behind the windshield. The rabbi gels out, and speaks to a young woman. She [quick]ly[2] ushers the drifters back onto the road. The police, satisfied, leave. "Am Israel Chai", Israel Will Live Forever, is sung.

Rabbi Silton, now standing at the back of the gathering, tells the reporter, "I would hope that there's an important lesson for humanity here: that people who commit genocide are not allowed to walk away free, and not be brought to justice." He dears his throat. His eyes glisten as he gazes at the blank housefront. "Mankind doesn't understand what kind of lesson we're teaching in history. This is the principal point."

"Hatikvah" is played again, and the students join in the song. The coffin is picked up, and borne slowly back down the road. The North Country air is growing colder now. The students are boarding the big green bus for the return trip. They call, "Rabbi, we're leaving!" He turns to join them. Other students follow. The film crew packs up.

A few patches of blue show through the gray afternoon as the bus pulls away. Its occupants have left a calling card at the unseeing house; across the foot of the driveway is a line of candles, broken by a Star of David. The star is made of toothbrushes.

Not even Paulis Ducmanis, author of the KGB propaganda targeting the leadership of the exile Latvian-American community, could have foreseen the success of Soviet efforts to paint an entire nationality as Hitler's enthusiastic henchmen—Elizabeth Holtzmann famously declaring "All Latvians are Nazis."

As Rochelle Saidel recounts in The Outraged Conscience: Seekers of Justice for Nazi War Criminals in America participating in protest on Hāzners' doorstep, Albany area Rabbi Paul Silton organized multiple protests outside Hāzners' home in 1979. However, with his defection in 1978, the year prior, KGB operative Imants Lešinskis had already revealed he had provided Gertrude Schneider, a Riga ghetto survivor visiting Latvia, a hit list of troublesome Latvian leadership in exile: a cornucopia of fabricated charges that they were escaped Nazi war criminals, the Soviets' #1 target being Hāzners, a prominent leader of the fervently anti-Communist exile Latvian community, and whom Lešinskis singled out in conversation with Schneider.

U.S. authorities apparently buried this inconvenience to their pursuit of Hāzners. Despite it being known to the Justice Department's Office of Special Investigations (OSI) that Soviet materials and "witnesses" were fabrications because Hāzners' defense called Lešinskis as a witness—not to mention U.S. collusion with Israeli authorities to coach "eye-witnesses" to identify Hāzners from photographs—the OSI doubled down on its persecution of Hāzners, filing an appeal in 1980 after the INS's denaturalization action, originally filed in January, 1977, was rejected for lack of evidence. The grounds for the OSI's appeal? Director Alan A. Ryan, Jr.[3] contended that Hāzners' mere membership in the Waffen-SS branded him as a war criminal. Ryan's motion was summarily dismissed.

Tellingly, that we hear the same "SS criminals" accusations today from the Russians and Jewish activists such as Richard Brodsky, who equate the Latvian Legion Waffen-SS with Hitler's elite SS, promulgating the lie that all were convicted as war criminals at the Nuremberg trials.[4] In the real world—not Brodksy's World Without Nazism Kremlin-fed fantasy—Latvian Legionnaires were stationed at the trials guarding accused war criminals.

Soviet propaganda disrupted more than Hāzners' life, it disrupted Silton's as well. Incapable of accepting Hāzners' ultimate vindication, Silton—who had promised to return to Hāzners' doorstep every year as long as Hāzners was alive—threatened mob justice (indeed, one Latvian was shot in his front yard, another bombed, yet another assassinated by the Mossad) and even fruitlessly hired a private investigator to find evidence of Hāzners' Nazi sympathies, affiliations, and crimes. Hāzners' unconscionable escape from justice—from Silton's perspective—subsequently drove him (by his own confession incensed to the point of hallucination) to the halls of the U.S. Congress to foment for the rooting out of Latvian Nazis.

One wonders if Silton, since blessing the U.S. Congress, ever came to the realization and acceptance that he persecuted an innocent man in service, albeit unwittingly, of a Soviet campaign to smear the Latvian people and nation.

We quote and discuss Saidel's account of the second, August 1979, protest at Hazners' home and Silton's voyage into despair in our excerpts section.