Scott and Jon Lee AndersonInside the League: The Shocking Exposé of How Terrorists, Nazis, and Latin American Death Squads Have Infiltrated the World Anti-Communist League

The Daugavas Vanagi (DV), “Hawks of the River Daugava,” are our crucible for the Andersons' contentions.

The DV are a veterans' self-help welfare organization founded in Zedelgem POW Camp, where guards shot Latvians for live target practice until they were informed the Latvians weren't actually Nazis. The portrayal of the DV here, however, holds true to the “Latvians are Nazis” story line.

Much has been written about different Nazi networks—ODESSA, Kamaraden-werk, etc.—that were created after the war to enable war criminals to escape and work in exile toward the formation of a Fourth Reich. No other organization, however, approaches the scope, depth, or influence of the Anti-Bolshevik Bloc of Nations. Since its inception, it has grown to become the largest and most important umbrella for Nazi collaborators in the world. The organizer and chairman of this “ex-Nazi International” is none other than Yaroslav Stetsko.

Though still largely controlled by the Ukrainians under Stetsko, the ABN now has chapters from other Soviet republics as well and from all of the Eastern European countries under Soviet control. A prime criterion for membership appears to be fealty to the cause of National Socialism; 1ABN officers constitute a virtual Who's Who of those responsible for the massacre of millions of civilians in the bloodiest war in history.

After Stetsko, the most important official of the Bloc in the 1940s was the chairman of its council of nations, 2Alfred Berzins. Described by Stetsko as “also a former prisoner of Nazi concentration camps,” Berzins was in reality a Latvian who volunteered to serve in a Nazi-sponsored police battalion responsible for the roundup and extermination of his nation's Jews and Communist Party members. In February 1942, he joined the Latvian SS and was awarded the German Iron Cross, First Grade. In exile, he was secretary of the Central Committee of the 3Dangavas [sic.] Vanagi (“Dangava [sic.] Hawks”), an organization composed of the Latvian SS officers and government ministers who oversaw the Final Solution in their country. Until his death, he lived under his own name in Hampton Roads, Virginia.

The Latvian chapter of the League is controlled by the Danagaus [sic.] Vanagi (“Danaga [sic.] Hawks”). Operating out of Munster, West Germany, and publishing a newspaper in Canada, the 4Hawks are a band of Latvian leaders who assisted the Nazis in exterminating the Jews of their Baltic homeland.

If one wants to find Nazi collaborators, it is only necessary to examine the European chapters of the World Anti-Communist League.

5Talivadis Zarins (Latvia): an official of the Daugavas Vanagi, a council of Latvian war criminals based in West Germany.

Spelling is the least of the Andersons' errors.

The authors' hyperbole promulgates the myth of the Germanless Holocaust and absolves Nazi Germany for it responsibility for the Holocaust. No collaborator operated without German supervision.

2 “Alfred Berzins. Described by Stetsko as ‘also a former prisoner of Nazi concentration camps,’ Berzins was in reality a Latvian who volunteered to serve in a Nazi-sponsored police battalion responsible for the roundup and extermination of his nation's Jews and Communist Party members. In February 1942, he joined the Latvian SS and was awarded the German Iron Cross, First Grade.”

Indicative of the authors' poor command of facts, they confuse:

Alfreds Jēkabs Bērziņš (1899–1977) fought in Latvia's War of Independence at the age of 19; as a Rīga Military School Cadet, he defended Rīga against the Bermontians. He joined the National Guard (Aizargi) in 1926, eventually rising to become its head. At the age of 32 he was voted into the Parliament (Saeima), three years later becoming a member of the administration. He became one of the youngest members of the Ulmanis regime after the May 15th, 1934 coup. Appointed as Minister of Public Affairs, Bērziņš was serving as Minister of the Interior when the Soviet occupation took place. With assistance, Bēŗziņš managed to escape a month after the Soviet invasion via Estonia and Finland to Sweden. In the summer or 1940, Bērziņš attended a Latvian conference in Geneva, Switzerland, then travelled on to Rome, Italy, where he attended a Baltic diplomatic conference until February, 1941. En route from Rome to Stockholm, the Gestapo arrested him as a British spy (meanwhile, the British considered him as an agent of either Germany or Japan), holding him in Berlin until July, 1941, then incarcerating him at the Sachsenhausen concentration camp for nearly three years. Bērziņš remained in Berlin upon his release. He fled the Soviet advance in early 1945, first to Nausnitz, then in July to Lübeck , where he entered a Displaced Persons ("DP") Camp. Bērziņš emigrated to the United States arriving in August, 1950, where he became active in the Free Europe Committee, a member of the Assembly of Captive European Nations (ACEN), and in 1951 founded the American Latvian Association (ALA), which supported organizations dedicated to cultural preservation in exile and groups devoted to restoring Latvia's freedom. We expect Bērziņš to have been involved in the “Visamerikas konferenci cīņai pret komunismu” (Pan-American Conference for the Struggle Against Communism), but can find virtually nothing regarding his relationship with the Anti-Bolshevik Bloc of Nations (ABN) other than mention he was among a number of “chairmen” of its “People's Council.” Bērziņš authored several books in Latvian and English on the Ulmanis regime and Sovietization of Latvia.

The contention that this Bērziņš was a Nazi concentration camp inmate, rather than being debunked, is true.[1]

Alfrēds-Jānis Bērziņš (1920-2011) was born into a family of municipal professionals (“ierēdņi” being a functionaries or office-holders). He enlisted in the army (mandatory service) in 1938, serving 18 months until being demobilized shortly before the Soviet occupation in 1940. When, after the Soviet retreat and German occupation, Bērziņš encountered the mass-grave exhumation of 30 corpses of Latvian prisoners maimed and killed by the Soviets, he voluntarily joined the police battalions which were already fighting as front-line units against the Red Army. In 1942 he was appointed unit commander on the Leningrad front. Bērziņš never participated in any collaborationist war crimes. Wounded in battle, Bērziņš returned to recuperate in Latvia for a number of months, then returned to the front in 1943 in the Latvian Legion (“Waffen-SS”, combat units whose members had no Nazi affiliation or allegiance), where he served bravely and with distinction.[2] Over the remainder of the war, he earned two Iron Crosses; holding off the re-invading Red Army in the Courland Pocket (the only part of Eastern Europe not “liberated” by the Soviets—Latvians hoped Courland could once again be their bridgehead to independence as it had been in their war of independence against the Russians and Germans a scant two decades earlier), he was gravely wounded. His sixth time wounded in battle, Bērziņš was evacuated first to Dundaga (still in Courland) where he had his leg amputated above the knee, then evacuated for further treatment and recovery to Bavaria, where he remained until taken prisoner in Marktredwitz by American forces. After the war, Bērziņš became active in the Daugavas Vanagi, rising to become its general-secretary. Bērziņš repatriated to his homeland in 2010 and passed away in 2011.[3]

There is no evidence to substantiate the authors' contention that this Bērziņš exterminated Latvian Jews and Communists or to question his service on the Eastern Front.[4][5]

3 “Dangavas [sic.] Vanagi (‘Dangava [sic.] Hawks’), an organization composed of the Latvian SS officers and government ministers who oversaw the Final Solution in their country”

We encounter the Germanless Holocaust again. There was no independent action by any of Hitler's collaborators, no “overseeing” of any part of the Holocaust. No Latvian was a member of the Nazi party or officer of the criminal Allgemeine SS. There was no such organization as a “Latvian SS” or officers thereof. The Germans entrusted industrialized genocide only to themselves, closely supervising their collaborators who, for the most part, had ancillary duties while the Germans did the killing. The Arājs Kommando collaborators, numbering 300-500 during the Holocaust, and other SD collaborators, were a notable exception in that they executed Jews, nevertheless, supervised at all times.[6] Beyond the authors' lack of understanding of the German execution of the Holocaust in Eastern Europe, we have their baseless contention that the Daugavas Vanagi consists of Holocaust organizers and perpetrators.

Here the Daugavas Vanagi members are portrayed more as some lawless band. The authors repeat the accusation they led Holocaust collaborators.

5 “Talivadis Zarins (Latvia): an official of the Daugavas Vanagi, a council of Latvian war criminals based in West Germany”

Only at its last mention is Daugavas Vanagi spelled correctly. Yet, spelling accuracy is still denied its victory as the Andersons misspell TĀLIVALDIS Zariņš’ name. The authors falsely allege Daugavas Vanagi are a “council of Latvian war criminals”, likely tirelessly working toward the rise of (their words, earlier) the “Fourth Reich.”[7] 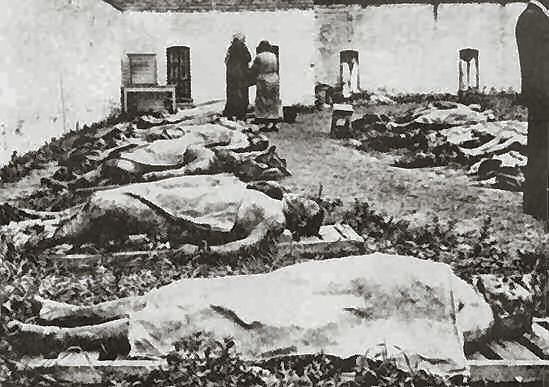 Above: Central Prison courtyard following Soviet retreat. Below: Rows of murdered victims at Baltezers, a scene such as Alfrēds-Jānis Bērziņš might have encountered, motivating him to fight on the Eastern Front.
From These Names Accuse, Latvian National Foundation, Stockholm, Sweden. 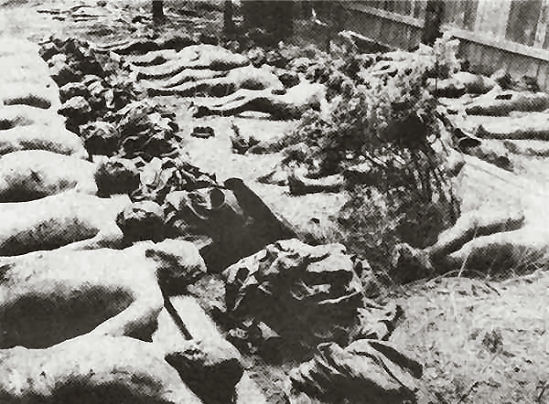