We resume with Hale's preface:

In spring 2010, I travelled to Riga to observe the annual ‘Legion Day’ – a parade by Latvian Second World War veterans. Nothing remarkable about that you might suppose. But you would be wrong; the veterans’ parade I witnessed commemorates the 1“Latvian Legion” recruited by Heinrich Himmler’s private army, the Waffen-SS, in 1943. Surviving members of this SS Legion mourn their fallen comrades in Riga’s cathedral, the Dom, then march to the ‘Freedom Monument’ that stands in central Riga close to the old town.

In 2009, the Latvian SS Legion was splashed across the front pages of British newspapers when 2David Miliband, then British Foreign Secretary, denounced the Conservative Party for forging links with far-right European parties – including the Latvian For Fatherland and Freedom Party that, Miliband alleged, supported the Nazi Waffen-SS. Miliband’s speech provoked an international storm – from both the Conservative Party and the Latvian government. 3Timothy Garton Ash, the doyen of historians of Eastern Europe, weighed in: ‘How would you describe a British politician who prefers getting acquainted with the finer points of the history of the Waffen-SS in Latvia to maximising British influence with Barack Obama? An idiot? A madman? A nincompoop?’

William Hague, now Foreign Secretary, refused to back down. The ‘Latvian Legion’ had nothing to do with the Holocaust, he claimed. The old Legionaries had never been Nazis. Hague went on: ‘David Miliband’s smears are disgraceful and represent a failure of his duty to promote Britain’s interests as Foreign Secretary. He has failed to check his facts. He has just insulted the Latvian Government, most of whose member parties have attended the commemoration of Latvia’s war dead.’ 4Hague neglected to mention that the ‘Latvian Legion’ refers to two Waffen-SS divisions: the 15th Waffen-Grenadier-Division of the SS (1st Latvian) and the 19th Waffen-Grenadier-Division of the SS (2nd Latvian). These war dead sacrificed their lives for Hitler’s Reich – and its ‘war of annihilation’. Now their surviving comrades will 5commemorate the memory of the legion as national heroes.

Hale's premise and fatal flaw in all that follows. The Waffen-SS were front-line units operating under the Wehrmacht command structure. They had no relationship to Himmler's elite SS defending the Nazi ideal or protecting Hitler. Hale paints them as Himmler's personal lackeys. Nor were they "recruited." By the end of the war, the Nazis had conscripted every Latvian male born after 1905. Report for duty or be arrested and shot.

2 “David Miliband, then British Foreign Secretary, denounced the Conservative Party for forging links with far-right European parties – including the Latvian For Fatherland and Freedom Party that, Miliband alleged, supported the Nazi Waffen-SS.”

Miliband's politically motivated rhetoric would not be England's first disservice to Latvians, that would be providing arms to Ivan the Terrible in 1558 supporting his campaign against Sweden, laying waste to northern Latvia, destroying all in his path, leaving neither man nor beast alive. While the SS were "Nazi", no Latvian was a Nazi party member, the Waffen-SS had no Nazi party affiliation, and there was no oath to Nazi ideology.

3 “Timothy Garton Ash, the doyen of historians of Eastern Europe, weighed in: ‘How would you describe a British politician who prefers getting acquainted with the finer points of the history of the Waffen-SS in Latvia to maximising British influence with Barack Obama? An idiot? A madman? A nincompoop?’”

Ash is also a columnist for the liberal Guardian, which revels in getting down into Britain's political gutter. More of Latvians being used as pawns in British political mud-slinging. Liberal Britain, starting in 2009, adopted Russia's version of Eastern European history and, particularly, its anti-Baltic stance and rhetoric. Hale anoints Ash as "doyen" to vindicate his own name-calling, exposing his ad hominem rhetoric for its political agenda. 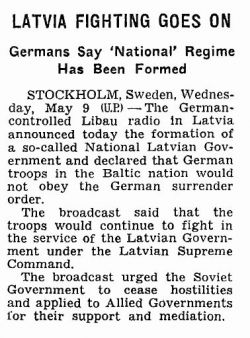 Members of the Latvian Legion have been called everything from naive to Nazi. Naive for believing they could repeat the miracle of their war of independence. Nazis for wearing Waffen-SS uniforms—and exemplary Hitlerites for being awarded more Iron Crosses for bravery in battle than any other non-German nationality. That the Latvian Legion were Waffen-SS divisions was and is no secret. Hale repeats his mantra that Latvians died in Hitler's cause. In Hale's narrative, there is no room for the truth that Latvians were fighting for their homeland, or that they held out in Courland against the might of the Red Army until the end of the war. Only when their declaration of sovereignty at the end of the war was ignored by the Western Allies did they understand they had been abandoned to the Soviets.

5 “commemorate the memory of the legion as national heroes.”

Rightly so, although Hale sees nothing but Hitler's “war of annihilation.” Activists dismiss Latvian hopes to ultimately save their homeland from both Russians and Germans as everything from naive and hopeless—and therefore illegitimate, to a blatant lie concocted only to white-wash their siding with Hitler against the Allies. Yes, imagine how poorly armed, poorly equipped, poorly fed Latvians, often sent in as cannon fodder by Germans saving their own skins when a major Red Army offensive was anticipated, felt facing American-supplied tanks and finding American-supplied rations among Red Army casualties still dressed in their warm American-supplied winter camouflage uniforms. The Latvians' true naivete was believing that Roosevelt and Churchill hadn't already handed them over to Stalin.

The only official act by Latvia's legitimate sovereign authorities in WWII was to put Latvia's merchant marine at the service of the American and British Allies, where it served with distinction.

Hale recounts his experiences of his trip to Rīga. We've sifted through hundreds of commemoration images but have not been able to find any to confirm or deny Hale's contention of Lithuanian "thugs" attending wearing WWII "death squad" armbands. Hale predictably expresses his horror at seeing Latvian Legion memoirs on sale and dismisses any and all contentions that the Waffen-SS weren't Himmler's willing lackeys. We skip forward in his account:

A short distance behind the police lines stands a smaller, silent group of older men and women – Latvian Holocaust survivors. Standing with them today is 6Ephraim Zuroff, the Director of the Simon Weisenthal [sic.] Centre, who has fiercely denounced Legion Day, and 7Josef Koren, a former beekeeper and now leader of the LAK, Latvia’s Anti-Fascist Committee. When a Legion supporter screams at Koren that ‘A soldier is a soldier and all are equal!’ he turns away. Another mantra of Legion defenders is that the volunteers were conscripts – compelled to join. But as Koren points out to journalists, ‘8At least 25% of the “Latvian Legion” were volunteers, recruited from the Latvian police who were involved in the murder of Jews and other Latvians – and the SS Legion should not be permitted a celebration of itself in the centre of our city’. Midday. Sunlight glitters on the Pilsetas canal. The old Legionaries and their honour guard begin to disperse. Soon they have vanished – the mute ghosts of history. Now there is a carnival atmosphere. At the foot of the Freedom Monument, groups of young Latvians take pictures of each other beside the mass of wreaths and flowers. A young man tells a BBC reporter that for him the old Legionaries are heroes. They defended Latvia. Many thousands of Latvian SS men gave their lives for the freedom of Latvia. These young Latvians look prosperous and happy. They do not shave their heads or sport provocative armbands. But their enthusiasm for the legion is troubling – and unexpected. 9It would seem that the old Legionaries have become a symbol not of collusion with a murderous foreign occupier but of Latvian national freedom. It is an outcome that SS Chief Himmler, who was profoundly hostile to the national aspirations of Latvians, could never have foreseen.

Contention versus Fact
6 “Ephraim Zuroff, the Director of the Simon Weisenthal [sic.] Centre, who has fiercely denounced Legion Day”

We respect Zuroff's position regarding "zero tolerance" for Legionnaire veterans wearing their Waffen-SS uniforms. However, Zuroff has also crossed the line from principles and substance to outright name-calling, as when he intentionally by his own admission submitted Soviet era propaganda to the Swedish government to investigate the Nazis named, then vilified Swedish authorities after the commission they appointed to investigate recommended his charges be dismissed.

Hale would have us believe Koren is some simple soul of the earth, moved to oppose metastasising Latvian neo-Nazism. In truth, Koren is a member of the LAK's parent, "World Without Nazism" (WWN), a Kremlin-funded front hijacking the moral cause of anti-Nazism to attack Russia's neighbours as beds of fascism, and to advocate for a common history of Europe per the Soviet version, that is, liberators not subjugators. Koren is a professional nationalist pursuing the Kremlin's agenda on Latvian soil. Russian foreign minister Sergei Lavrov—representing the regime which has invaded Ukraine and killed thousands including shooting down a civilian airliner, all under the guise of returning Crimea to its "roots" and protecting Russians from Ukrainian fascists—praised WWN in 2011 on its work to "counter attempts to rewrite and distort history, primarily the outcome of World War II."[1]

8 “At least 25% of the ‘Latvian Legion’ were volunteers, recruited from the Latvian police who were involved in the murder of Jews and other Latvians – and the SS Legion should not be permitted a celebration of itself in the centre of our city”

As for "25%" and conscripted versus volunteered, the Legion was largely conscripted. Regardless, any who volunteered for the Legion did so only with the vision of the Legion becoming the basis for a new Latvian army in a Latvia with independence restored. While the Soviet Union fabricated evidence and conducted show trials of units such as the 18th Police Battalion, accused of slaughtering all the Jews of Slonim, Belarus, even the Soviets never accused anyone of a war crime in the service of the Legion. In fact, Soviet history books did not even mention that any Latvians fought against the Red Army in WWII—only for the liberation of the "Latvian SSR" from the Hitlerites.

9 “It would seem that the old Legionaries have become a symbol not of collusion with a murderous foreign occupier but of Latvian national freedom.”

This, and every mantra, of Latvians—and Estonians and Lithuanians—rushing into the arms of Hitler ignores the brutal year of Soviet occupation which preceded the Nazi invasion. Ignores the mass deportation only a week prior to Hitler's invasion, in which Jews, 5% of the population, constituted 12% of Stalin's victims. Ignores that Hitler interrupted Stalin's next deportation already in the works, that list having been left behind, intact, in the Red Army's haste to retreat. Ignores that the Russians, for the 95% of the population who were not Jews and victims of the Holocaust, were more brutal and arbitrary in their violence than the Germans. Do we really believe that the Red Army's mass rape of German women was the first such atrocity? Stalin's mass graves pre-dated Hitler's.

We only need to look to the turmoil in the Middle East to witness alliances of "necessity" between enemies being justified to fight ISIS. The Bolsheviks were the Baltics' ISIS. Why would Latvians have held out until the end of WWII in the only bit of Eastern Europe not "liberated" by Stalin[2] if not in hopes of restoring their freedom?